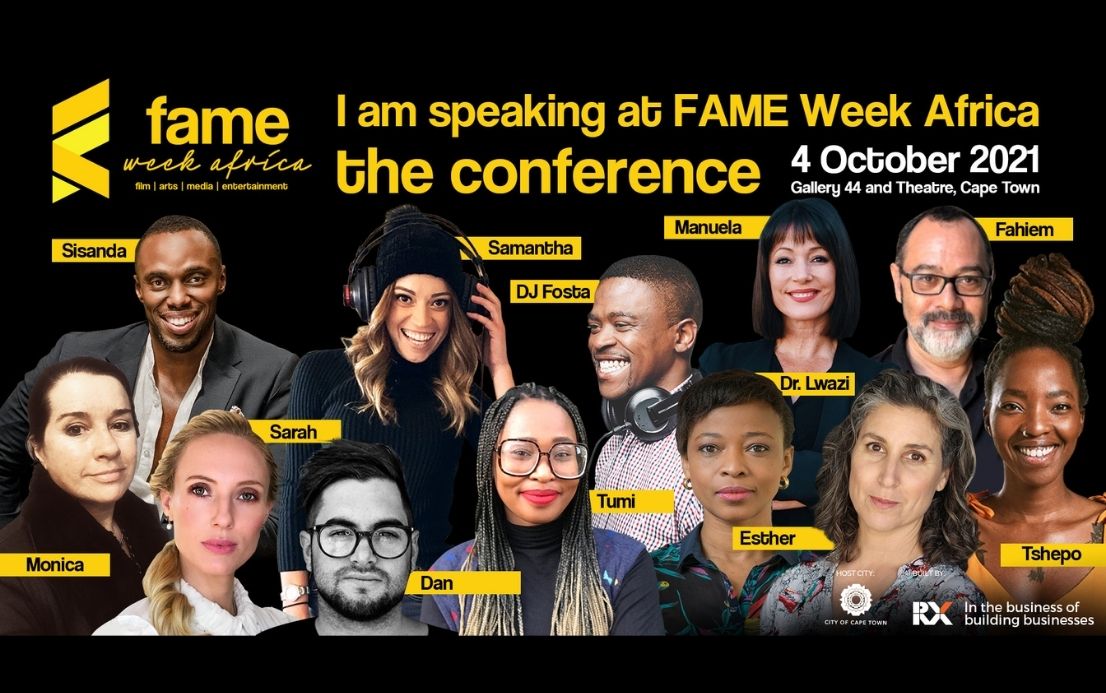 Keep your finger on the pulse of the evolving cultural and creative industries at FAME Week Africa Conference on Monday 4 October at Gallery 44 and Theatre in the Host City of Cape Town. From hot trends to strategic approach and business models, if this is your world, these are your people.

To kick us off, here are 12 thought leaders you’ll get to hear at FAME Week Africa 2021:

Sisanda Henna is an award-winning, world-class actor, with an impressive portfolio of diverse and powerful leading roles. Henna’s most recent successes include M-Net Cinemax ZDF created series Trackers, which became the popular African channel’s number one viewed show. Rogue, with a seasoned global cast including Megan Fox; Inconceivable, an M-Net original; One Night Kwa Mxolisi a Showmax original film; and Agent, a 13-part series currently streaming on Netflix to 190 countries and also aired on Canal+ & SABC.

Tshepo is a writer, director, mother, activist and all-round good human being. She spent her early years lecturing television scriptwriting at AFDA Film School and stepped into the animation space, working as a writer on Netflix’s Mama K’s Team 4. Currently working as an Executive Creative Consultant and writer on Kiya and the Kimoja Heroes, a preschool series produced by Triggerfish, eOne, Frogbox, TeamTO and Disney Jnr, Tshepo also taking a first-time seat in the Director’s chair as part of the Disney+/Triggerfish Kizazi Moto short film anthology.

Sarah Kozlowski is a South African actress and producer based between Los Angeles and Cape Town. She has a variety of TV shows and films under her belt, namely Tempy Pushas S2 and Thola S2 to name a few. Sarah is currently starring in the TV show Agent as Zoe Zante on Netflix. She plays an ambitious Football club owner carving a name for herself in a tough male-dominated industry based on a real character.

DJ Fosta is a prolific producer and DJ who is influenced by South Africa’s deep house sound. He hails from the township of Langa, the home of the legendary artist Brenda Fassie. In 2006, He founded 021 records with Sindisa “Skull” Cima to provide a platform for artists from Langa.DJ Fosta has also been deeply involved in community projects in his township and has been an important part of the non-profit Bridges for Music. In 2014, DJ Fosta was invited to perform at the Glastonbury Festival in the UK.

Dr. Lwazi Manzi is a young professional who embodies the diverse and energetic spirit of a South African institutional entrepreneur. Lwazi has 12 years of experience as a frontline health care worker, mostly dedicated to emergency medicine. Her keen interpersonal skills, unique creative voice and strong leadership abilities led her beyond the medical field and has resulted in a prolific film career as a producer and executive producer.

Spend time with Stellenboom and you too will be caught up in his enthusiasm and dynamism. A bubbling personality coupled with an eclectic mix of marketing and public relations experience in the corporate world, he is not shy to express his amative feelings for all things “arty farty”. His experience includes being an advertising and graphic design executive, marketing and communications manager at global accounting firm KPMG and head of office for the Western Cape Minister of Cultural Affairs, Sport and Recreation. He also had a fulfilling career as a dancer, choreographer and dance director.

Tumi Mogapi has had the pleasure of serving both major publishers and independent writers and publishers for more than a decade, with her passion in providing music rights awareness in Africa. In 2021 she founded Culture Coins Agency, assisting production houses, advertisers, filmmakers, musicians and creatives with music rights consultation and expertise. She was also instrumental in founding the South Africa chapter for Women in Music.

Manuela joins the discussion on: A vibrant cultural economy post-Covid is key to sustaining artist’s livelihoods and supporting other industries allied to the arts

For the past seven years, Monica has led the Film and Media Promotion Unit at Wesgro, Cape Town and the Western Cape region’s Tourism Trade and Investment Promotion Agency.  A certified African Film Commissioner, she is passionate about growing employment and investment in the Fourth Industrial Revolution (4IR) creative industries.

Esther Pearl has spent 20-plus years working in Production Management in the entertainment industry. Most of her film career was spent at Pixar Animation Studios, where her feature film credits include the Academy Award-winning films The Incredibles, Wall-e, and Monsters, Inc. Outside her work at Pixar, her credits include films such as Titanic, Starship Troopers, Armageddon and What Dreams May Come.

Dan Mace is a young creative and visionary film director, Youtuber and the founder of JOE Films in Cape Town. Through his 10-year career behind the camera, he has directed over 100 commercials, music videos, documentaries, and short films, spanning four continents. He joined YouTube in 2011, and has grown an audience of over 783,000 subscribers, and generating more than 35 million views of his films. Through his career, he has won multiple awards, including three Young Director Awards at Cannes Lions, an African Crystal Film Grand Prix, Bronze Loerie Awards, Ciclope Africa.

To see the full programme, click here. Tickets are free but booking is essential. Click here to book.