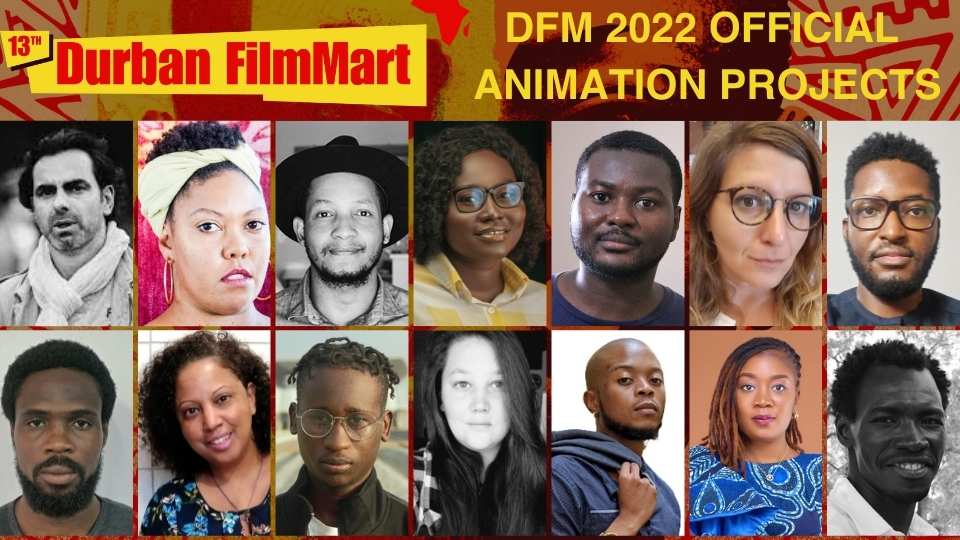 The Durban FilmMart Institute is proud to announce its official animation programme for the 2022 edition.

After expanding into the animation space in last year’s edition, the animation focus at the 13th Durban FilmMart has grown substantially with the help of funding from the German Federal Ministry for Economic Cooperation and Development (BMZ), implemented by GIZ in collaboration with the Goethe-Institut to support the cultural and creative industries (CCI) in South Africa and a number of other countries in Africa and the Middle East through various projects since 2018.

“Over the last few years there has been an exponential increase of animation productions in Africa. Despite the scarcity of training and development opportunities for animation professionals, there has been notable interest by international networks and broadcasters to purchase African animation content as they see the huge potential of unlocking African consumer markets,” says Magdalene Reddy, General Manager of the Durban FilmMart Institute.  “Recognising the growth, skills and energy of the animation industry and the value it brings to the creative economy, DFM has opened up an enlarged space for animators in the 2022 programme.”

The animation programme includes a partnership with Tshimologong through which 10 animation creatives will be given the opportunity to participate at the DFM Pitch and Finance Forum.

“Tshimologong is proud to partner with DFM. This is a fantastic opportunity to demonstrate festivals collaborating to raise the opportunity and voice of digital creatives in Africa. We have got to create a clear value chain of how a creative can determine the pathway of getting support for their projects based on its stage of development. The broader ecosystem is strengthened through this form of partnership,” says Lesley Donna Williams, CEO Tshimologong Digital Innovation Precinct.

The animation projects in the market are as follows:

Prior to the Pitching Forum the 2022 DFM projects will receive mentorship assistance from producers and professionals. The mentors for this year are – Vanessa Sinden, award-winning producer of both live action and animated films with more than 20 years of filmmaking experience, and Oliver Catherin who has produced, among others, Kiki of Montparnasse, which won a César for best short animation film. He is also one of the co-founders and administrators of the European Animation Awards (Emile Awards).

In collaboration with African Animation Network, the Animation industry sessions at this year’s DFM will feature across both the virtual and physical events; the virtual stream will focus on distribution, production, funding and gaming, while the physical stream will look at distribution, and industry development in the film industry within South Africa. The animation discussions will highlight not just the nuanced differences between animation and live action terrains but engage on the challenges and opportunities that exist for film professionals through animation storytelling mediums.

DFM 2022 will be presented under the theme ‘Revolution Evolution: Changing the Narrative’ as both an online and physical programme during the period 22-31 July.  Registrations are open for both online and physical participation at Durban FilmMart.  Visit https://durbanfilmmart.co.za/dfm-event-2022/ to review the participation options, and to explore the full programme of activities and opportunities on offer.

The DFM animation programme is supported by the project “Cultural and Creative Industries”, which is implemented by the Deutsche Gesellschaft für Internationale Zusammenarbeit (GIZ) GmbH on behalf of the German Federal Ministry for Economic Cooperation and Development (BMZ) and in cooperation with the Goethe-Institut. By promoting the development of entrepreneurial, digital, creative, and technical skills through training programmes and by strengthening the ecosystem, the project aims to  improve employment and income opportunities for creative professionals Africa and in the Middle East.

The Durban FilmMart Institute receives principal funding from the Durban Film Office and the eThekwini Municipality.  The DFM 2022 event is kindly supported by the National Film and Video Foundation, KwaZulu-Natal Film Commission and Wesgro.

About the Durban FilmMart Institute