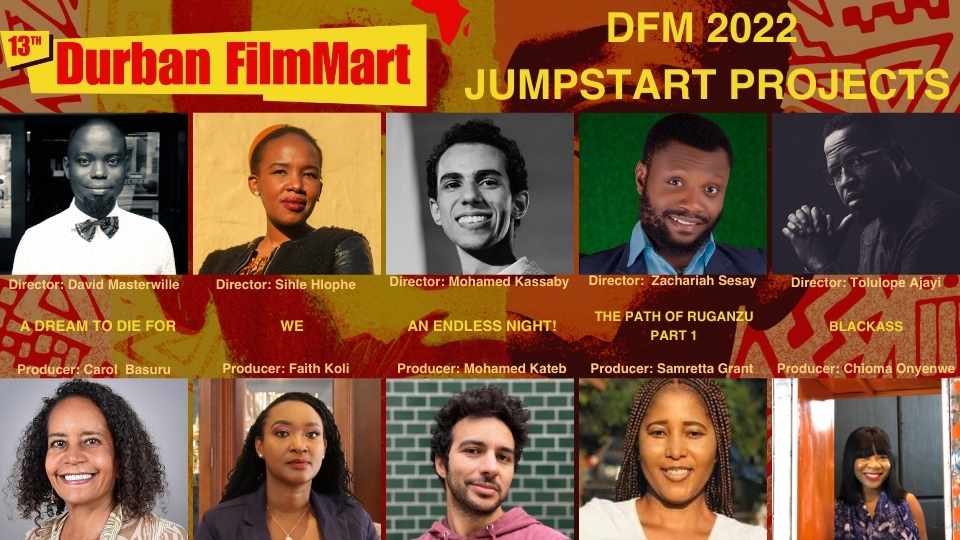 Established by the DFM over a decade ago, Jumpstart is an incubator programme that looks at the tools and key techniques for scriptwriting.  This year sees an extension to the Jumpstart programme as CNC’s Deental-ACP programme co-organise and finance an additional workshop to assist projects with the niche skills of packaging projects for an international market.  This extension will form part of DFMI’s year round programme.

The 2022 Jumpstart programme takes place during the Durban FilmMart, from 22-25 July.

A Dream To Die For (Director: David Masterwille) – is a narrative looking at illegal mining and the destruction it leaves behind. It sets the vivid portrayal of the assault on humanity and the environment while exploring the portrayal of friendship and redemption.  It’s in the spirit of this cause that this film will set itself apart from others.

Blackass (Director: Tolulope Ajayi) – the topics of Neo-Colonialism, conflict and colourism are explored through the eyes of a down-on-his-luck thirty-year-old man living in Lagos. Blackass intends to explore daily Nigerian life and the realities inherent – poverty and economic struggle and how these contribute to and hone a penchant for deception.

An Endless Night! (Director: Mohamed Kassaby) – Delving into topics like meditation on modern existence, and the complexities and idiosyncrasies of modern contemporary life in great cities, this project looks at the life of a man who faced a crisis and connected with the emptiness of the world around him. It also focuses on humans searching for the meaning of spirituality.

The Path of Ruganzu Part 1 (Director: Zachariah Lloyd Sesay) – This film explores the movement of young people from one territory to another for a range of reasons and advocates for their wellbeing and raises awareness about the dangers they face. It also hones in on the fact that travel is good but there is a better way to do it. The project is about a journey of discovery that will give Africans the power to believe in themselves.

“We” (Director: Sihle Hlophe) – an adaptation of Lidudumalingani Mqombothi’s short story, “Memories We Lost”, the short story won the 2016 Caine Prize for African Writing. The story

Illness and how a mother learns to accept her daughter’s special powers.

This year’s mentors are Guillaume Mainguet, head of  Produire au Sud whose workshops are across 7 countries (France, Brazil, India, Israel, Morocco, South Africa, Taiwan,) ; Tracey-Lee Rainers whose most recent works include being Seriously Single currently showing on Netflix and the SAFTA award winning film Address Unknown; and Jérémie Dubois who has written over a dozen short stories, two of which were selected at the Cannes Film Festival.

DFM 2022 will be presented as both an online and physical programme during the period 22-31 July.  Registrations are open for both online and physical participation at Durban FilmMart.  Visit https://durbanfilmmart.co.za/dfm-event-2022/ to review the participation options, and to explore the full programme of activities and opportunities on offer.

The Durban FilmMart Institute receives principal funding from the Durban Film Office and the eThekwini Municipality.  The DFM 2022 event is kindly supported by the National Film and Video Foundation, KwaZulu-Natal Film Commission and Wesgro.

The Jumpstart programme is funded by Institut Francias-South Africa and CNC.

About the Durban FilmMart Institute:

To help professionals is one of the main mission of the CNC and its two partners, FOPICA (Senegal) and DOCUBOX (Kenya). Through the DEENTAL-ACP program, series, short and feature film projects from African, Caribbean and Pacific (ACP) countries that got supported by the Aide aux cinémas du monde and/or the Fonds pour la jeune création francophone are better financed and opportunities are given to audiovisual professionals. Programs are being developed in collaboration with festivals in Europe (Cannes International Film Festival, Séries Mania, etc.) and in ACP countries (Durban FilmMart, FESPACO, Dakar Court, RFC Madagascar, etc.) to allow ACP professionals to work on their projects with experienced mentors, to deepen their knowledge of the sector and to build a real international network.